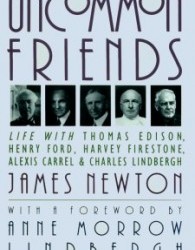 One of the chapters in our book is “Tell Your Story”. Which is indeed a great way to motivate your tailgate. If you don’t have a great story to tell, you probably just don’t know your story, because you are in fact pretty amazing. And if you DO know your story, there are a million reasons you might want to tell it. You don’t have to be all braggypants about it, but if your story’s really that great, go for it. Somewhere, SOMEONE will probably benefit from it. This little tool is fairly well-known to corporate and personal coaches, and is a key tool (whether they realize it or not) for publicists and marketers. So why not use it yourself, right?

But it had never occurred to me the value of telling someone ELSE’s story. Recently I read an amazing but much-overlooked book called Uncommon Friends: Life with Thomas Edison, Henry Ford, Harvey Firestone, Alexis Carrel, and Charles Lindbergh

. It’s the personal story of James Newton, and his relationships with all these 20th century legends. I’ve never seen it on anyone’s “recommended reading” list, but I just added it to mine. We’re all familiar with “the story” of these icons of industry an innovation, probably to the point of finding quotes like “One percent inspiration, ninety-nine percent PERSPIRATION” almost tiresome.

And that’s one of the things that makes this book so worth reading. This guy worked directly with these industry leaders, and in key roles. And in fact was their friend. And yet, you’ve probably never even heard of him. That’s probably because he was busy busting butt doing WORK, and learning all he could about life along the way. Imagine if someone from today were friends with Steve Jobs, Oprah Winfrey, Jeff Bezos, Linus Torvalds, and, I don’t know, Eckhart Tolle. They’d probably have an interesting story to tell in their later years, and that – tastefully – is how Newton tells his story. Some reviews criticize the book for being “soft” on these famous figures, or criticize Newton for “preaching” simply because he brings a lot of his personal spiritual beliefs into the book. But the latter is exactly one of the reasons I think this is such a worthy read. We live in an era that is rather thin on deeper, soulful values, and we see that fact reflected daily in the damage wrought by purely profit-driven pursuits. And regarding Newton’s “being soft” on his subject? He was their FRIEND, for cryin’ out loud. Besides, he was from a more polite era, the people he wrote about were long-deceased, and he himself was an old man at the time of the book’s publication.

In the end, Newton’s gentle, sometimes religious, sometimes almost naive storytelling is exactly what makes the book so engaging and inspiring. It reads a little like your grandfather telling you the story of his life by telling you about the great adventures he shared with friends and well-placed people.

Get It Now On